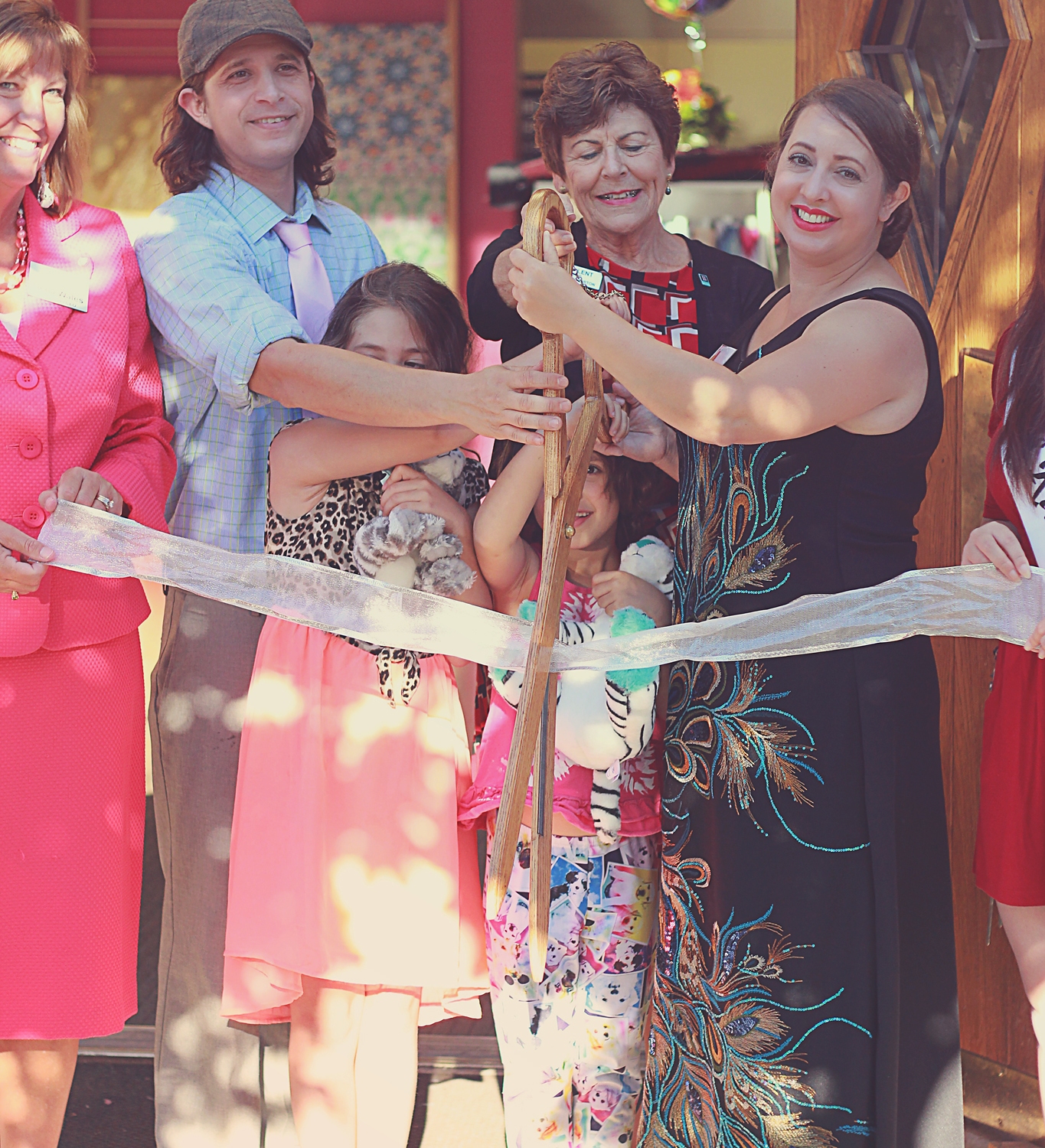 A funny thing happened on my way to starting my own business…I somehow managed to pull it off. (I realize that is not exactly a joke. Give me a break, I work 120 hours a week these days.)

When last I left you I’d just lost a lease and 5 months of my life I would never get back. Things were dark. Really dark. But then they turned around. Like, fast.

So here’s what happened: somewhere along the lines I’d helped pioneer a group of female business owners, mostly to avoid the other business networking groups that charged a lot of dues and were overrun with MLM distributors who thought they had businesses.

I also tend to befriend people randomly, like the time I totally copped to eavesdropping on a woman’s phone call outside our kids’ gymnastics class only to learn that she’s the owner of Purpose Boutique, which just opened its third location. Then there’s Jennifer, someone I bonded with at a Home and Garden show, who I cyber-stalked to learn that we both love wine. (I eventually hired her to help with store design and she’s amazing.) Sarah, the co-founder of the group, is new to the area and posted in a FB group that she needed friends and I’m like “I’ll be your friend!” and it turned out nicely.

Anyway, I have a point. Befriending random FB woman led to me forming a group that included Jennifer of Mise En Place Design, which JUST SO HAPPENS TO BE LOCATED directly next to Purpose’s flagship store in Bremerton, Washington. One day I visited Purpose to say hello, walked past another storefront and there’s Jennifer. Oh, hi, we have an appointment tomorrow, but really I just kind of want to be your friend. I will pay you $1,000 to hang out with me.

Both Jennifer and Christie (of Purpose) had asked me if I’d ever considered Bremerton as a location for my store. I laughed and laughed and laughed. Because I grew up in Kitsap County, Washington, and for the last 4 decades Bremerton has been somewhat of a Dumpster Fire. It was the type of place that made the news because people get randomly stabbed. The drug dealers live there. One time I knew a guy who knew a kid who heard from his cousin who lived in Bremerton that their neighbor ate candy on Halloween that was poisoned, and they died. One time a kid from Bremerton was on a field trip and their bus crashed and the kid survived, but all of his intestines were hanging out. Like he could look down and just see his intestines. I hear AIDS comes from Bremerton.

Let me put it like this: Bremerton is Pawnee. I grew up in Eagleton.

To put it a different way, I was friends in junior high/ high school with members of the band MXPX. Jennifer is not from our area and totally bought into the propaganda of their single “Move to Bremerton” (um, they’re from SILVERDALE) and accepted on blind faith that Bremerton is an awesome and magical place. She also had somewhat of a crush on the drummer Yuri Ruley. I met Yuri (along with guitarist Tom) in seventh grade home ec, where they may have been the biggest geeks on the planet. Sorry, guys, but it’s also probably why we got along. Geeks seek their own level. Apparently they grew up good but I haven’t seen them since they became adults, and I can’t not know awkward geeky 7th-grade Yuri from home ec. That’s just who he is to me. But Jennifer apparently got to meet adult Yuri in person and even knows his wife now and it was totally worth bragging about and everything she dreamed, or something.

What I’m saying, though, is that when Jennifer and Christie (newish to town) were asking if I’d considered Bremerton, I felt like they were asking me how I felt about 7th-grade Yuri. But really they were asking me how I felt about adult Yuri, a person I didn’t know. So I was like “Pshaw, never! Have you seen those zits, and there was an incident with an awkwardly inappropriate comment in 3rd period that made me avoid Yuri for the rest of life itself.” And they were like “Yuri? The rock star? With hundreds (I don’t know) of fans? He does not have zits, he has SEX APPEAL.” (Or something, I don’t know. Even pictures of him look the same. I’m sure the feeling is mutual, with my awesome glasses/braces combo.)

And I checked it out and, well. Look. Bremerton has become kind of awesome? (Bremerton. Not Yuri. Jury is still out on adult Yuri. KIDDING, I hear he’s great.) So what happened is the kids all came in and took over the downtown because it’s cheap and affordable and Real Brick, and historical and artsy and just amazing in general. And there are some old standouts who have been trying to bring Bremerton “back” for real and they’re so psyched that the kids are coming in and making it a reality. And real estate is cheap so you can buy a house within walking distance to a ferry, which will take you by boat to Seattle, and it’s really pretty surprising it has taken this long because doesn’t a boat commute sound amazing? And everything has a view of the water because where I live water is everyfuckingwhere. (Seriously my neighborhood has a private beach and I am most certainly not rolling in it.)

So I went to a meeting of the TBD group (name To Be Determined, which I nicknamed Totally Bossy Divas, which stuck) and I spent the entire meeting basically ranting about losing my lease. And the amazing women allowed me to vent and ply myself with wine and dark chocolate M&Ms, and finally Jennifer said “Why don’t you rent the space right behind me?”

“Right behind” her (building on a corner lot) is right next door to Purpose, owned by Christie who I befriended via abject eavesdropping. (You following me?) It was backwards kitty-corner to Jennifer’s design showroom, in an early 1920’s building with an open layout, meaning the landlord was very picky. Because each storefront has open access to the other stores through the back, the landlord allows current tenants to have say in who moves in.

The available space was 3,000 square feet, including a 1,200-square-foot open mezzanine. High ceilings, former art gallery, original 1920’s hardwood floor, gasp-worthy giant picture windows. Once I took a look I loved it so much that I refused to talk about it to another living soul for fear that I would jinx it.

The landlord is nationally-renowned artist Amy Burnett whose primary objective was finding a tenant whose business would fit the creative and artistic vibe of a burgeoning art district, AND who would earn the approval of existing tenants Jennifer and Christie. Because she was being so picky about a tenant, she was willing to offer a lease at a basically rock-bottom price.

Long story short, I met with Amy the following Monday. She was so supportive, so excited to have us move in, and so understanding of our current time crunch, that we had an executed lease by that Thursday and I was inside painting by Saturday. If I hadn’t previously known Jennifer and Christie the chances of it happening that quickly (or at all) were slim. Because I knew them both it was like complete divine intervention. I eventually overheard Amy telling my mom that from the moment she’d met me, she’d wanted me as a tenant “…bad. I would have done anything.” So maybe I should have negotiated better, but OF COURSE NOT, the space is amazing, I’m paying a song, and Amy is the best landlord on the planet.

Meanwhile, Bremerton has pulled out a Leslie-Knope-Style Pawnee welcome, with councilmen coming by to personally thank me for opening a business in town, the mayor eagerly attending our ribbon-cutting, and an active Chamber of Commerce and Downtown Business Association planning events and activities to attract people to the area. Another strange realization? Something like 90% of the businesses around me in a 2-block radius are women-owned (informal FB check-in, not a scientific poll). It’s an amazingly supportive community, something I never would have felt in strip-mall-city Silverdale, and I feel blessed every goddamned day that I didn’t get that lease in Silverdale.

I knew when the previous lease fell through that it meant that there was something even more incredible out there. I knew it even as I complained and ranted.

I was in our new space and painting on July 1st. This explains why you haven’t heard from me since then. I’ve seen painted, built, inventoried, hired, opened, and run the store for nearly 4 months and the fact that I’m too busy to post is an amazingly good thing. I will post more at another time. You can see pictures or whatnot at www.dylanfabrics.com. Please follow us on social media: Facebook, Instagram, and Twitter. There is still a lot to do, branding-wise but I’m a one-woman show so I’m getting there.

Melissa Dylan is a writer and MBA whose relationship to sunflower seeds is pathological. View all posts by Melissa